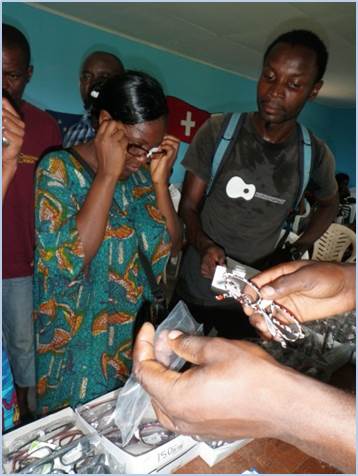 Laura Knapp is an active member of the CTF team. She traveled with the group four times (2010-2017). Knapp has offered to share her journal from the 2012 trip with everyone.

In the late afternoon, we went to church for a special cultural exchange with the Nzameyo Church of Kribi mothers. I’d already agreed to play soccer with the youths receiving the new soccer balls and uniforms so I missed most of the action at church. I was reluctant to leave ’cause I had looked forward to this day and had brought a gift from Alaska. But, it was just not possible for me to be at both places at the same time. 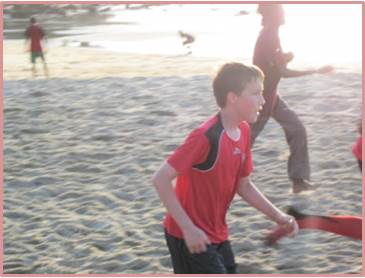 Soccer on the Beach:   The soccer game with 12 youths (ages 7 to 13 years) was absolutely fun and entertaining! I had pictured in my mind scrimmaging on a narrow dirt alley in a residential neighborhood. Instead, we played on a sandy field right next to the ocean – the view from this beautiful, warm beach absolutely took my breath away. Just prior to the game, we had a group photo with the youth wearing soccer jerseys that Dave Wight had donated – very spiffy looking – and smiles from ear to ear on every kid! The first half of the game, I volunteered myself as the goal keeper so that the kids could run around and be rambunctious. Eli scored a goal on me – apparently, I was too distracted by the sheer beauty of Kribi, haha. The second half, I became a kid at heart and got to kick the ball around a little. 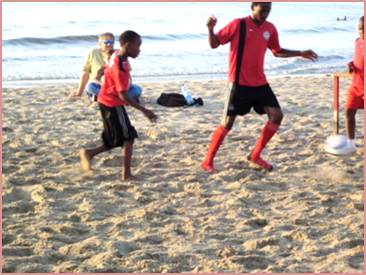 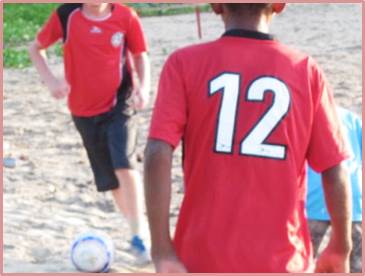 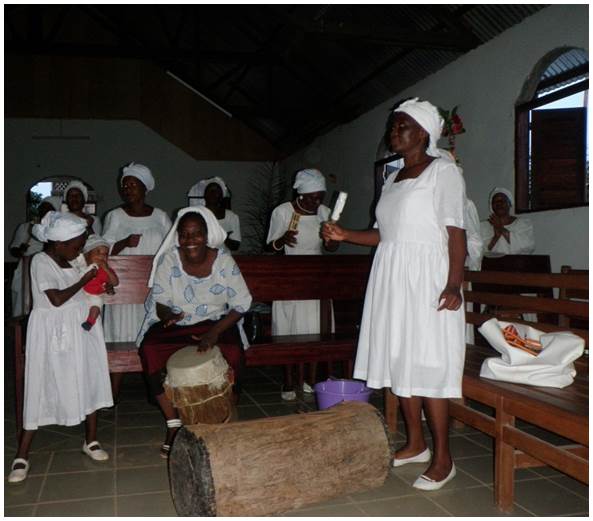 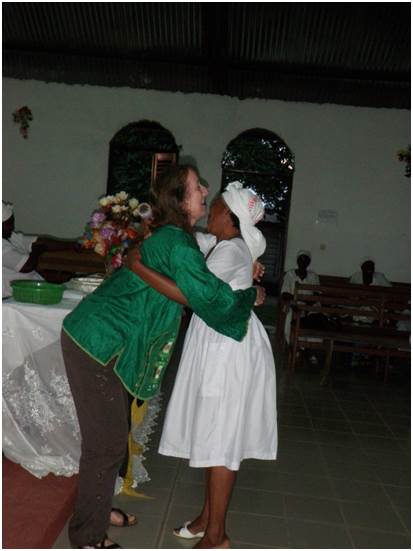 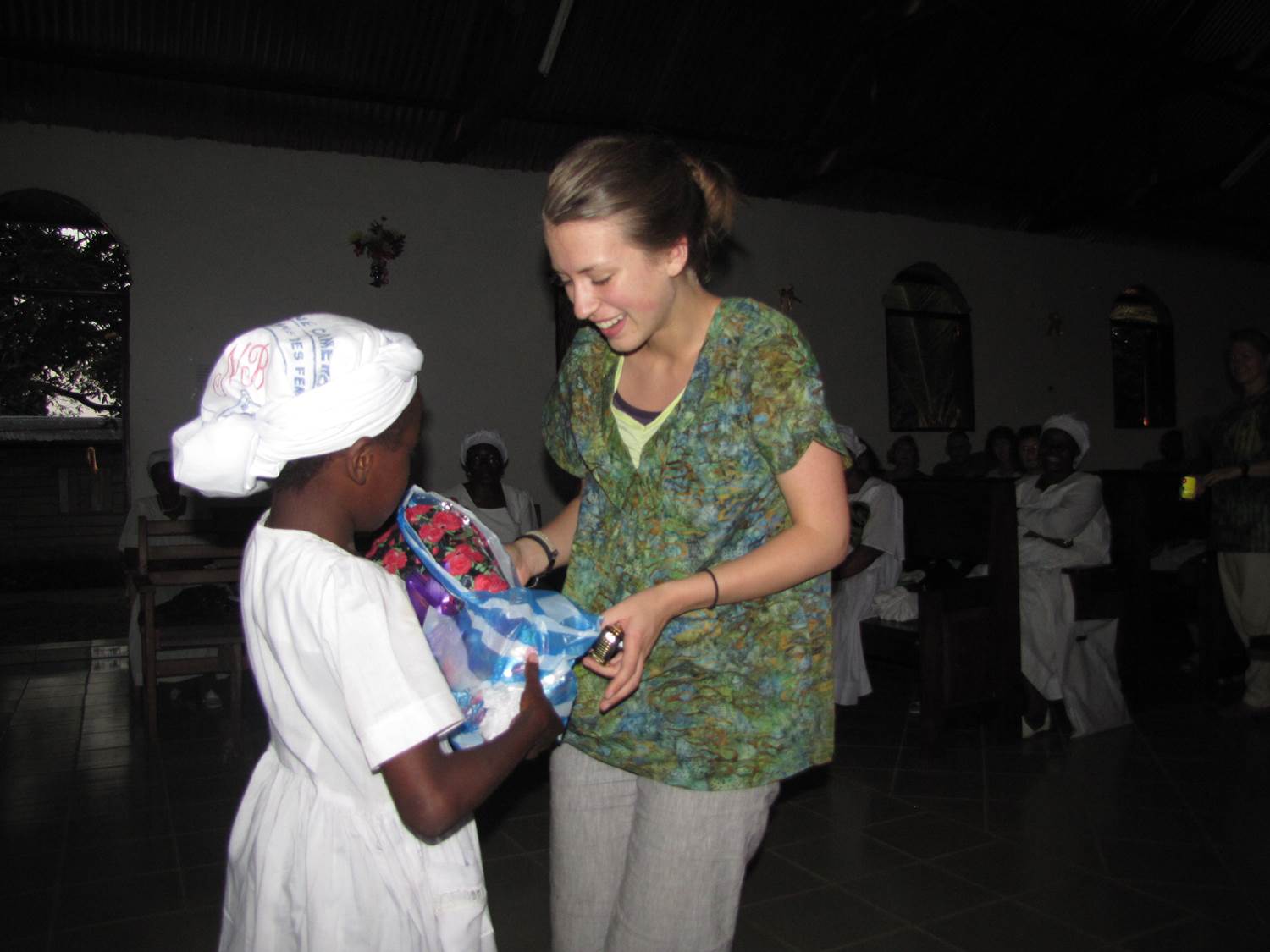 The reports I heard about the exchange of church were part beauty and part – well – really interesting. It seems every woman and girl who participated in the exchange became both the mother and daughter of two different women. Christi and Gail explained it like this (for example): A Kribi woman drew a mom’s name out of the hat – and that woman became Barb’s mom. Barb gave the gift to her. Then she drew the name of another Kribi woman from a different hat and that woman became her daughter. They traded back and forth until all the names were gone.

Amazingly – they had just the right number of people present to make sure no one was left out. What made it interesting is that many moms were younger than their daughters and some daughters were older than their moms. The Alaskan moms were thrilled with bou-bous made from special African fabric honoring moms on their day. (Lucky we had the seamstress project going on to alter the tops to fit the next day.) Gifts aside, my mom, Barb said it was nice to have a relationship that was woman-to-woman with people from the congregation – and the singing was once again, a real treat for them all.

Last night I had my first slumber party in room #10 with Christi and Gail (where I slept the rest of the time in Kribi). Awkwardly, the timing was bad because Christi had not been feeling well – maybe it was a stomach bug; maybe it was jet lag and exhaustion – it was not contagious. The reason for my switch was mainly for more leg room and better protection from the mosquitoes.

For the past two nights, I had been sleeping poorly in a bunk bed about 6” shorter than me. And the top bunk, where I had been sleeping was pretty close to the ceiling and I could feel the mosquito net touching my head. So when Christi offered to share her queen-sized bed, I jumped at the chance – with tremendous joy :-). We had a great time and I felt so refreshed this morning. 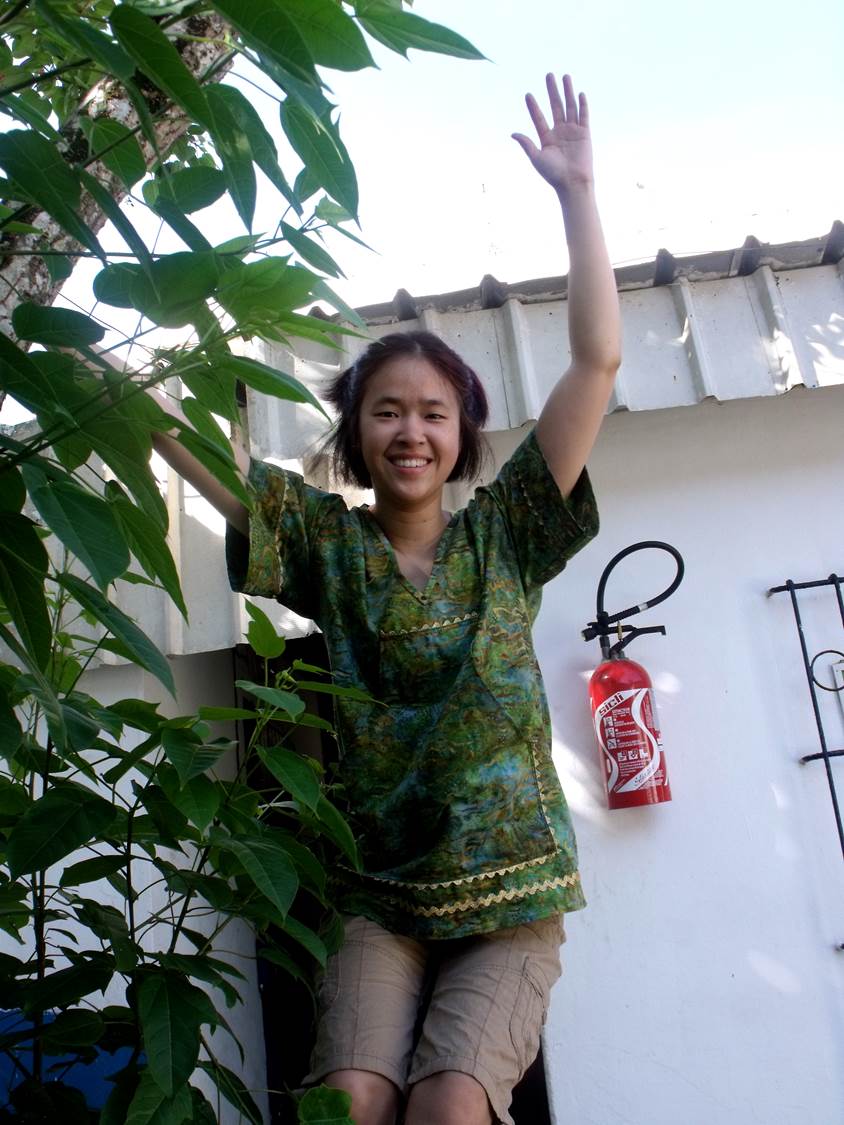 This time we arrived at the nurse’s aide training site and I noticed several new folks sitting on the benches patiently waiting for the eyeglass room to open. Word about the distribution had spread through the villages and some people had travelled long distances hoping to get some glasses. The disappointment on their faces was obvious when they got the word that we had run out and ended the project – it was truly disheartening to see. But, we had to remind ourselves that we had made a huge difference to the lives of those who had received the glasses throughout the week – kind of like the inspirational story, The Boy and The Starfish. 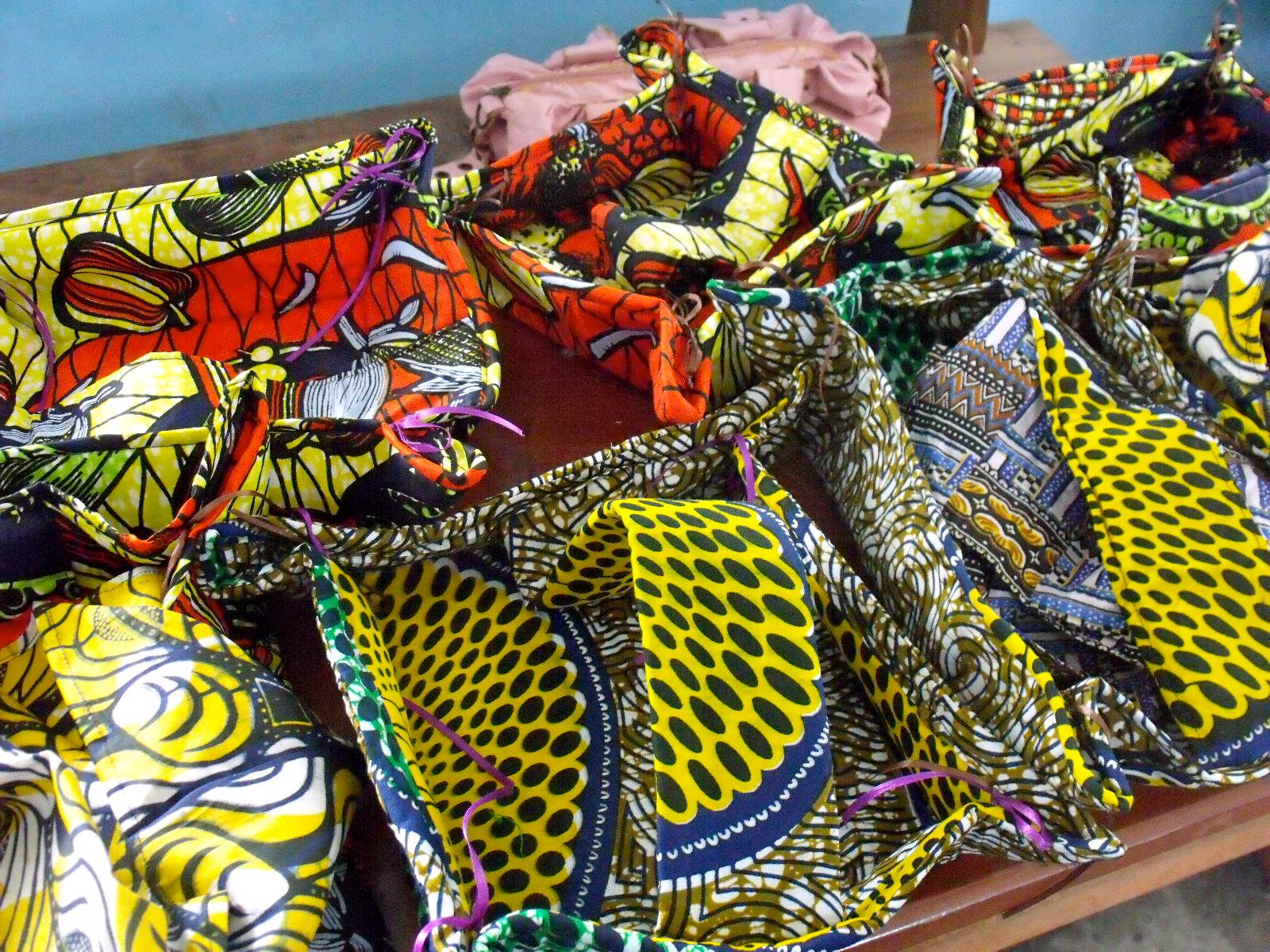 Mom continued her sewing workshop with the seamstresses – they moved on to making bags. The rest of us worked on the construction project – shoveling sand, mixing cement, and hauling it across the field in wheel barrows. Bonnie, the most senior member of our crew (and Kelly’s mom) is rumored to be in her 70s, impressively hauled bucket-loads of cement back and forth at the site as if she were half her age. I was inspired. It was not an easy or light job. (Bonnie is a horse trainer and is used to working hard, she says.) 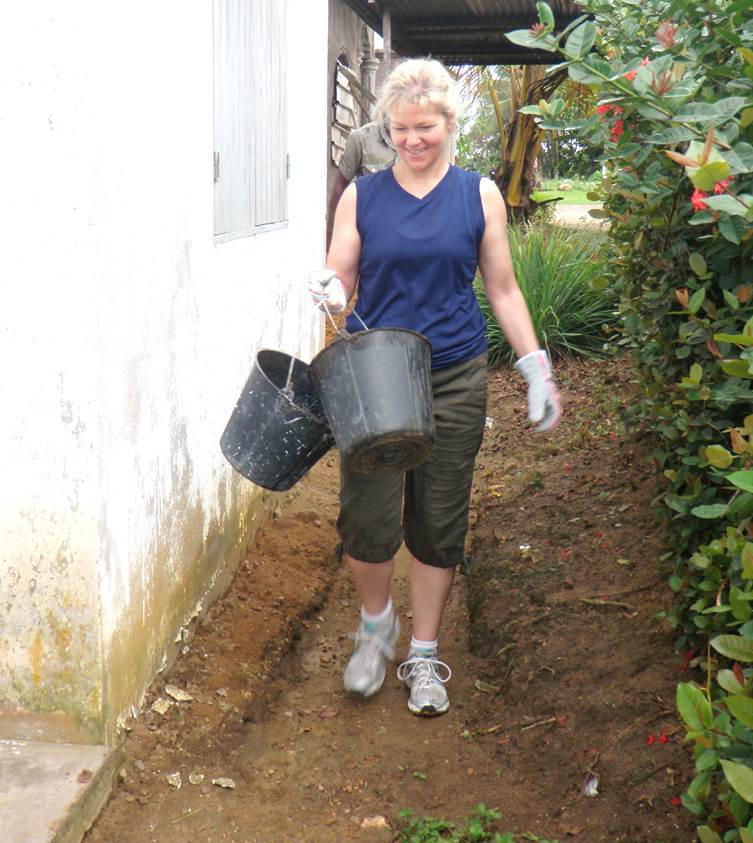 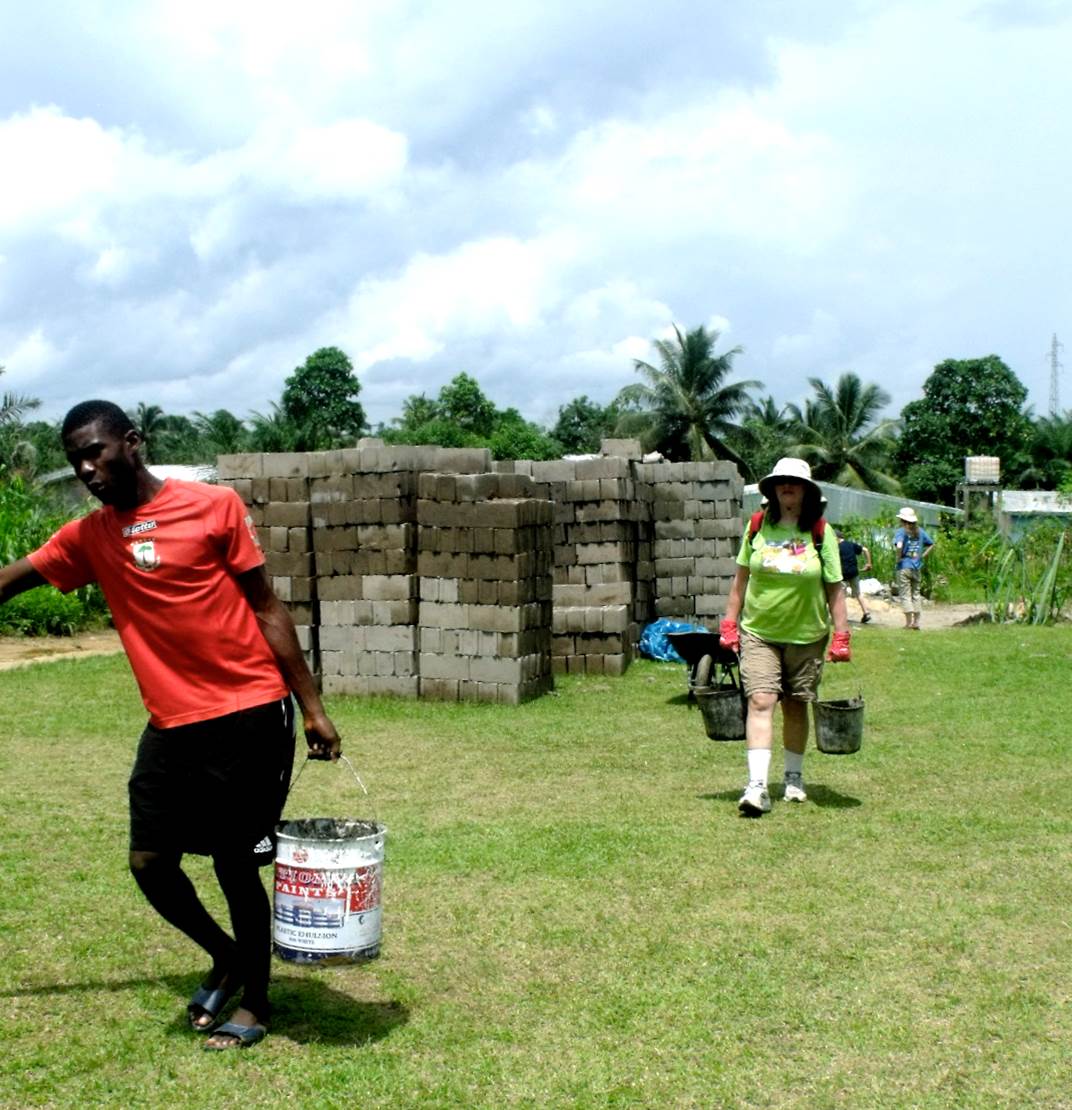 Then we went to meet the Governor of the State Kribi. He a friend of David Essim, and wanted to meet each of us, individually. He thanked us for our work at the Center, and encouraged us to continue making the nurse’s aide and laboratory aide program happen because it will benefit all the people there. 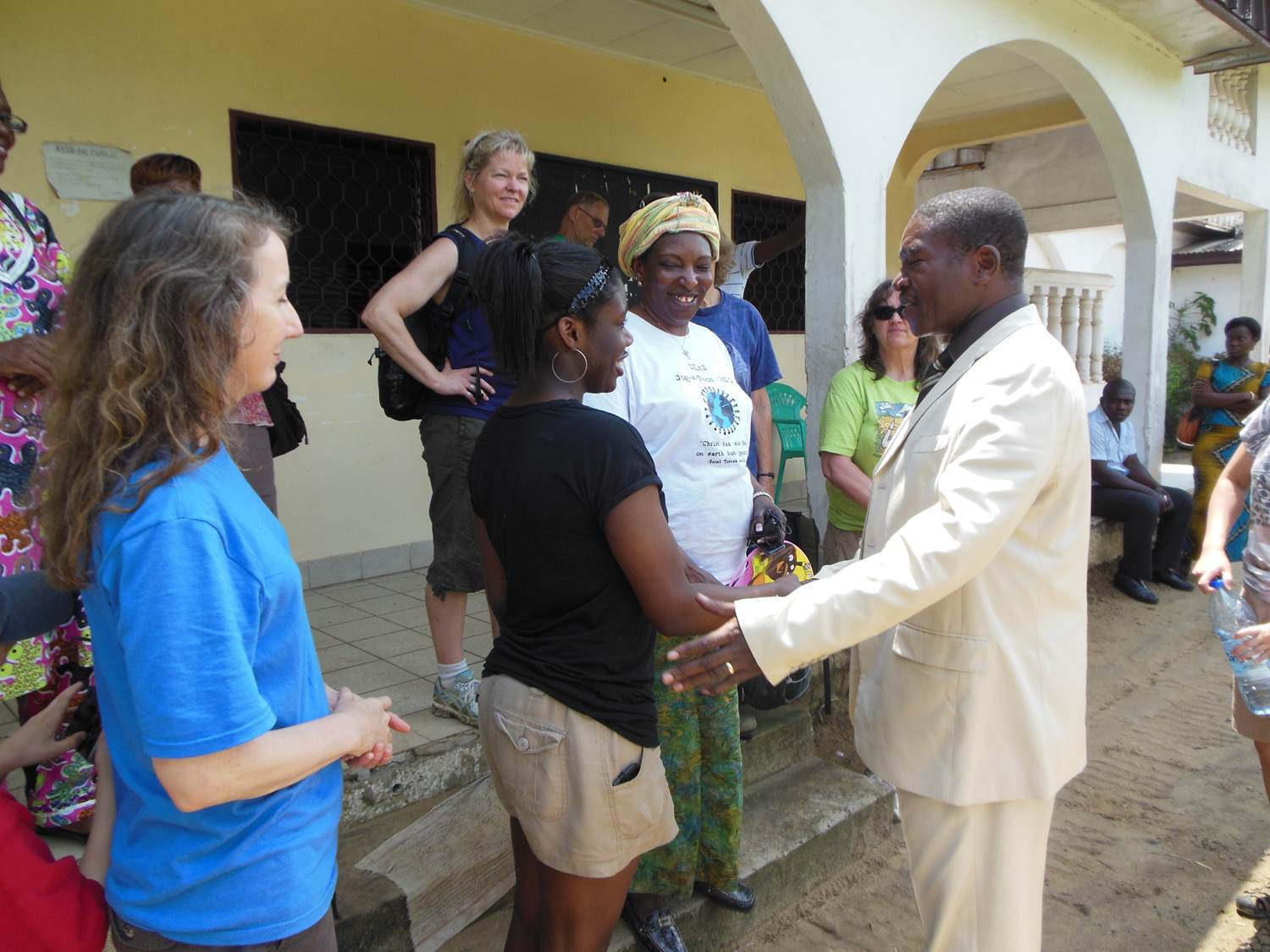 A Visit to the Pgymy People

The Canoe Ride Down the River

After lunch, our group took the bus and headed to see the Pygmy village, which is only accessible by dugout canoe. At the river bank, we broke off into groups of 6-8, the maximum number to fit in a canoe (along with the guy who rowed the canoe). Pygmies are indigenous people of Cameroon and are very short in stature – about 4 to 5 feet. The boat ride is very serene and relaxing… well, expect for Kendra, who kept thinking we would tip over any minute. The only sounds along the way were jungle noises. We were warmly greeted by the Pygmies. 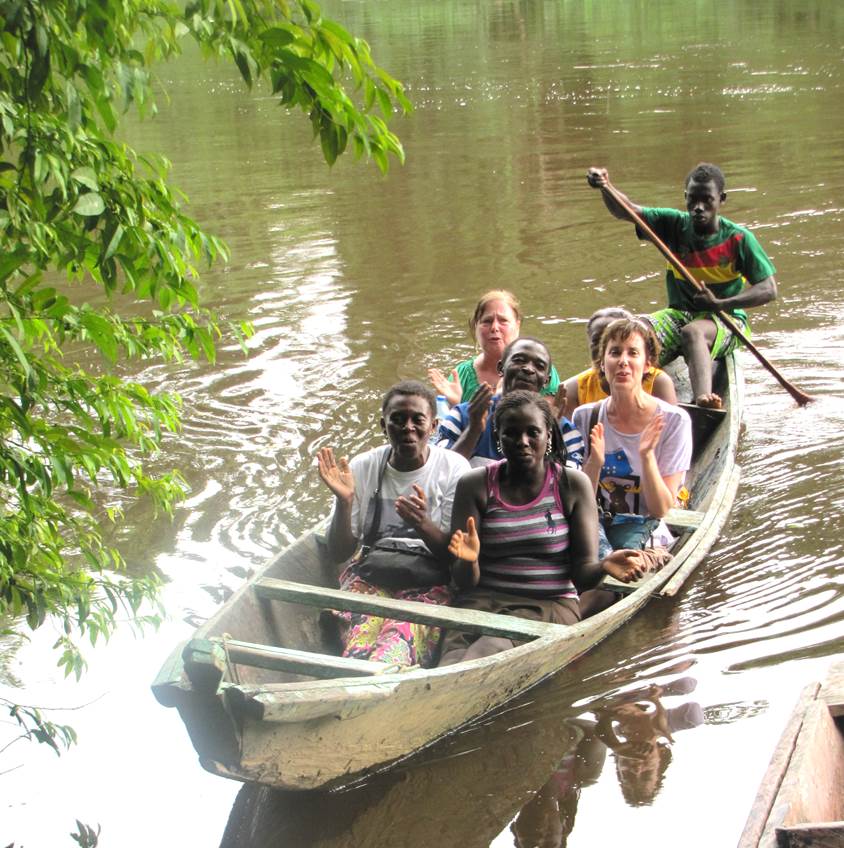 Dancing Around the Donation Pot 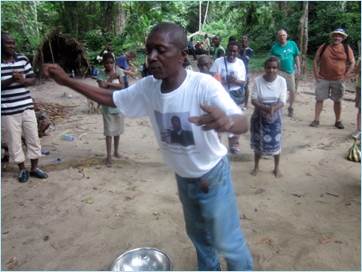 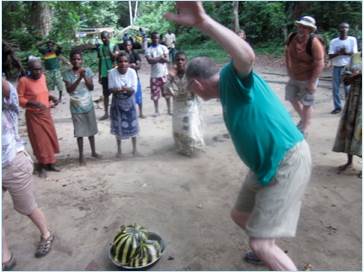 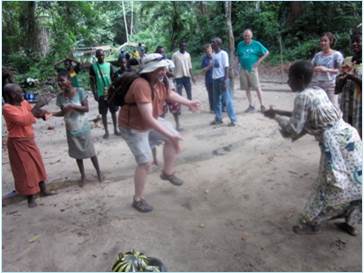 They showed me the inside of a straw hut which is cute but is pretty cramped. They performed some traditional dances and then invited us to dance along. One by one we each danced and donated CFAs (local currency) into a metal pot to help support their village. We all looked a little silly dancing in comparison to them. On our way back, some saw monkeys in trees – it was hard for me to see with all the leaves glistening in the breeze. 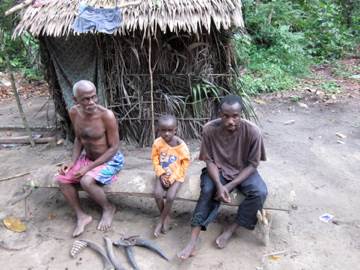 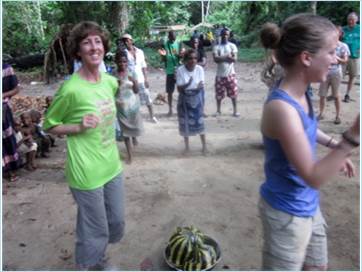 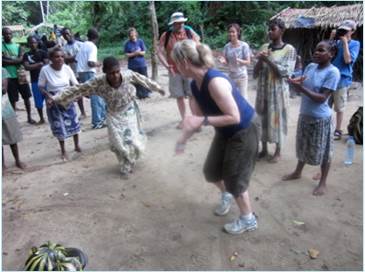 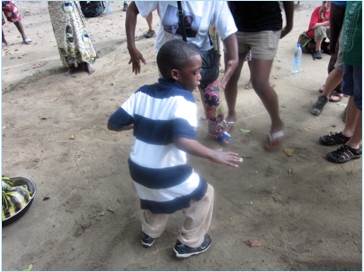 A scenic canoe ride from the pygmy village.

Scroll back to top