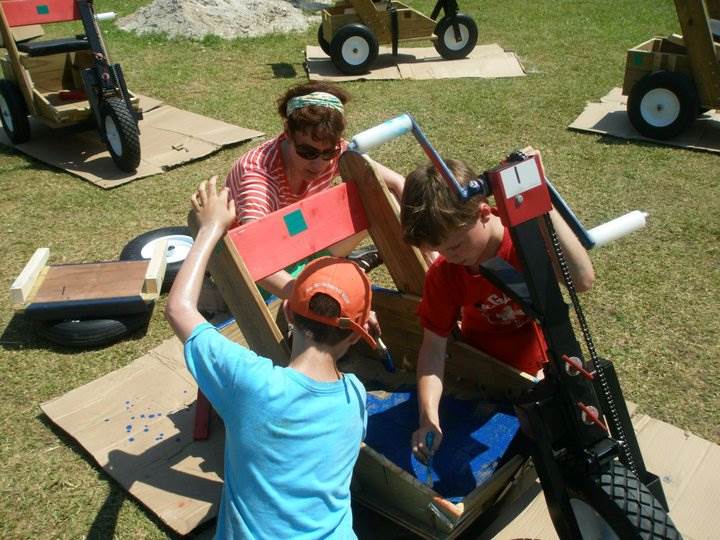 Walt Dinkins is a former CTF supporter who came along during the 2010 mission trip. Dinkins wrote a special journal sharing the daily activities and events he experienced during his three-week stay with the Cameroon Task Force team. Enjoy!

Packing For The Trip

To Paris We Go! 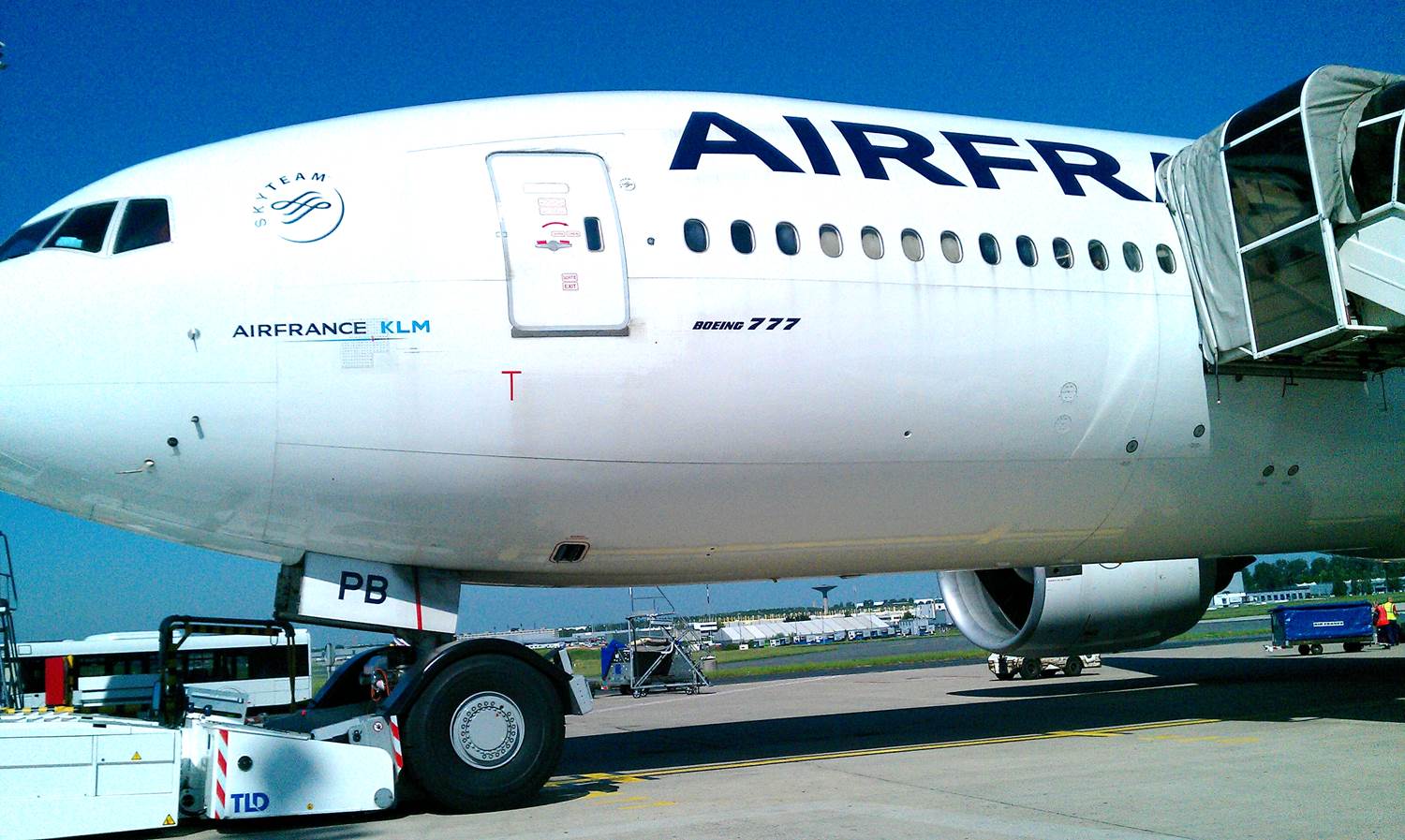 Early morning we arrived in Paris and went thru customs with no problem. All 4 large bags for Cameroon came thru without problem and customs didn’t even check them. We found a storage locker to keep them at the airport so we did not have to drag around with us while visiting Dimi. We took the TGV (bullet train) direct from the Paris airport to Brussels. Dimi & family met us on the platform and we went on a local train to Vilvoorde and walked 5 min. to their apartment. Thursday we explored Leuven, the college town where Dimi & Elke met. Damali and I started our malaria pills.

Baggage and Injuries Before Flight

We took the early morning train from Dimi’s to Brussels’ mid station and then the TGV bullet train back to the Paris airport. We all made it on the plane but Dr. Marylyn and Kai just barely made it. We could have really used her earlier because Pastor Jo Ann fell on some stairs while handling large bag and had cuts and bruises on right side of her face. She said that she felt OK but looked woozy. She got ice on the plane and evaluaion from Marilyn.

Air France wanted her to go home but she insisted and AF relented when advised that we had doctor on board who would monitor. It was an inauspicious start. Most of the travelers who came straight from Anchorage did not sleep well on their flights. Marilyn said she was delayed after just getting thru security when someone pulled her out of line for an extra check because she had declared an overweight bag. They were almost harassing and threatening to make her leave the bag behind. She ended up having to pay 200 euro. 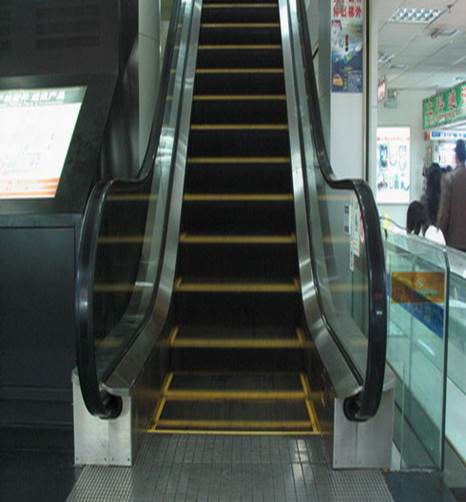 We arrived late in Douala as the only flight to the airport. It was not too hot but very humid. Several bags did not make it so we waited in baggage claim area working that out. We took several van loads to the hotel with first one having most of luggage plus Jo Ann and Marylyn to work on JoAnn’s injuries away from chaos of the airport. Pauline met us at the airport along with Joaz who is older gentleman who helped coordinate schedules, translating and would help with laundry. Joaz gave us mosquito nets to be used in the hotel rooms.

A Load of Luggage

The hotel and bus staff loaded luggage on top of the bus that was to take all of us from Douala to Kribi. Nancy Clifton calculated: 20 folks, at least 100 lbs each, 2000+ lbs, so 1 ton was riding over our heads. We had only one place on the way where the bus felt in danger of tipping over. 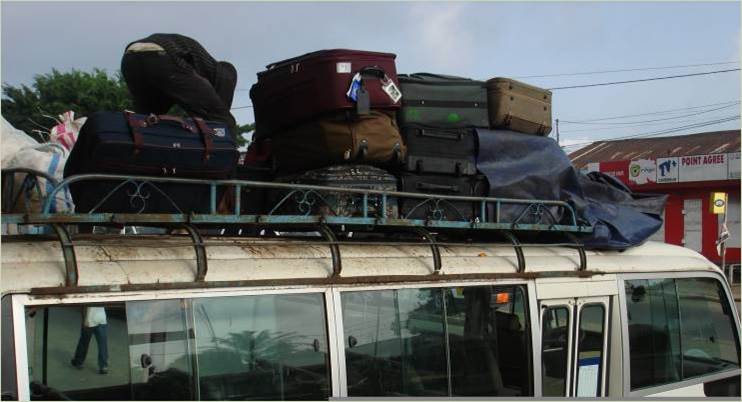 We made it to Kribi fine on excellent road after 3 hours. We dropped off at Pauline’s place all the non-personal “project” suitcases which included most of the donated items. (Pauline is our main contact there.) Dedication led by Pauline on our arrival was done to the tune of “On Christ the solid rock I stand, all other ground is sinking sand.” It seemed appropriate, with us going a few minutes later to the Coco Beach resort hotel where we stayed the rest of our trip. Jo Ann was first one in the water; her injuries did not slow her down. The hotel has a few improvements from the previous St. John team’s last visit, including cable TV (albeit in French) and air conditioning. 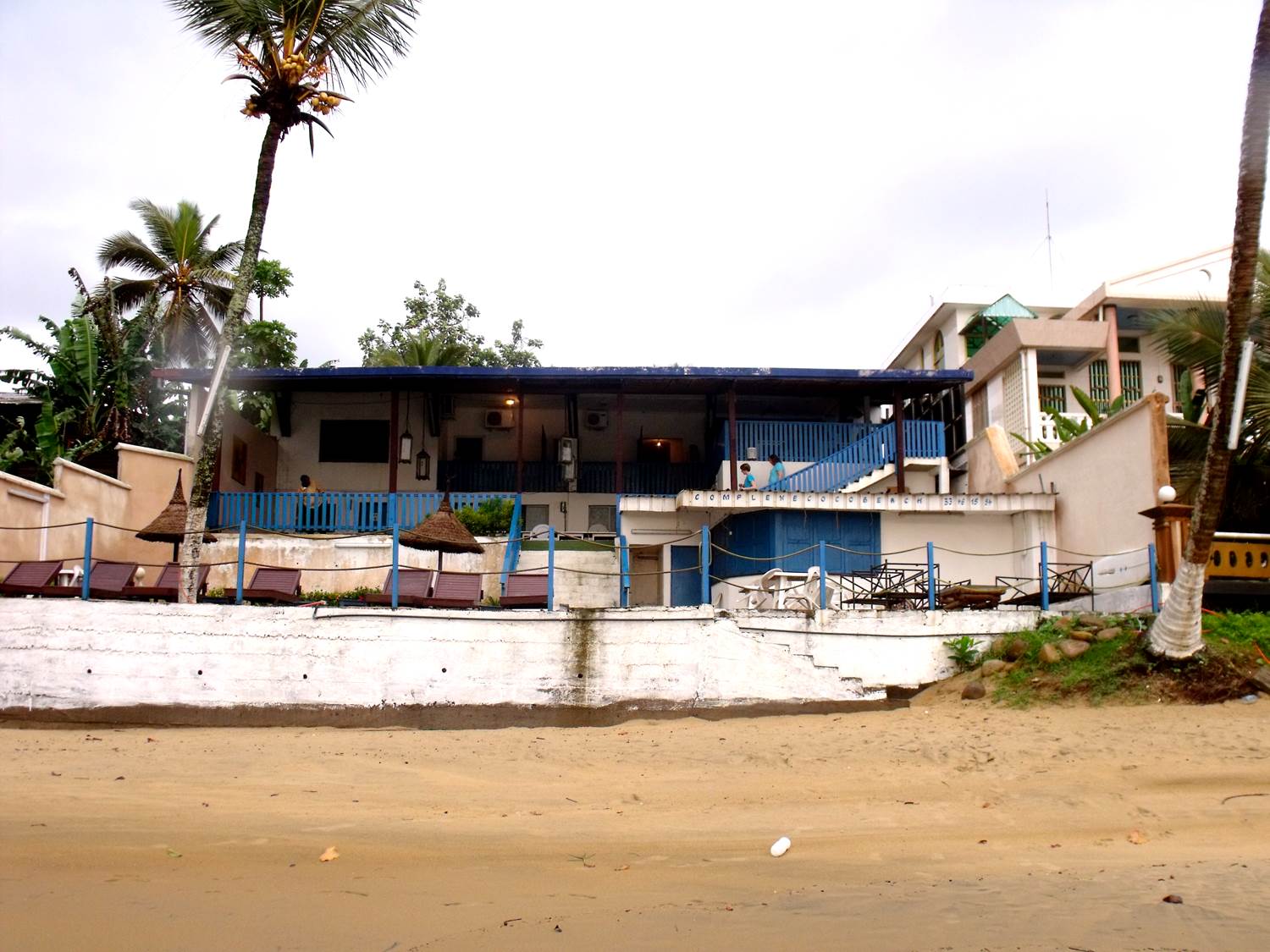 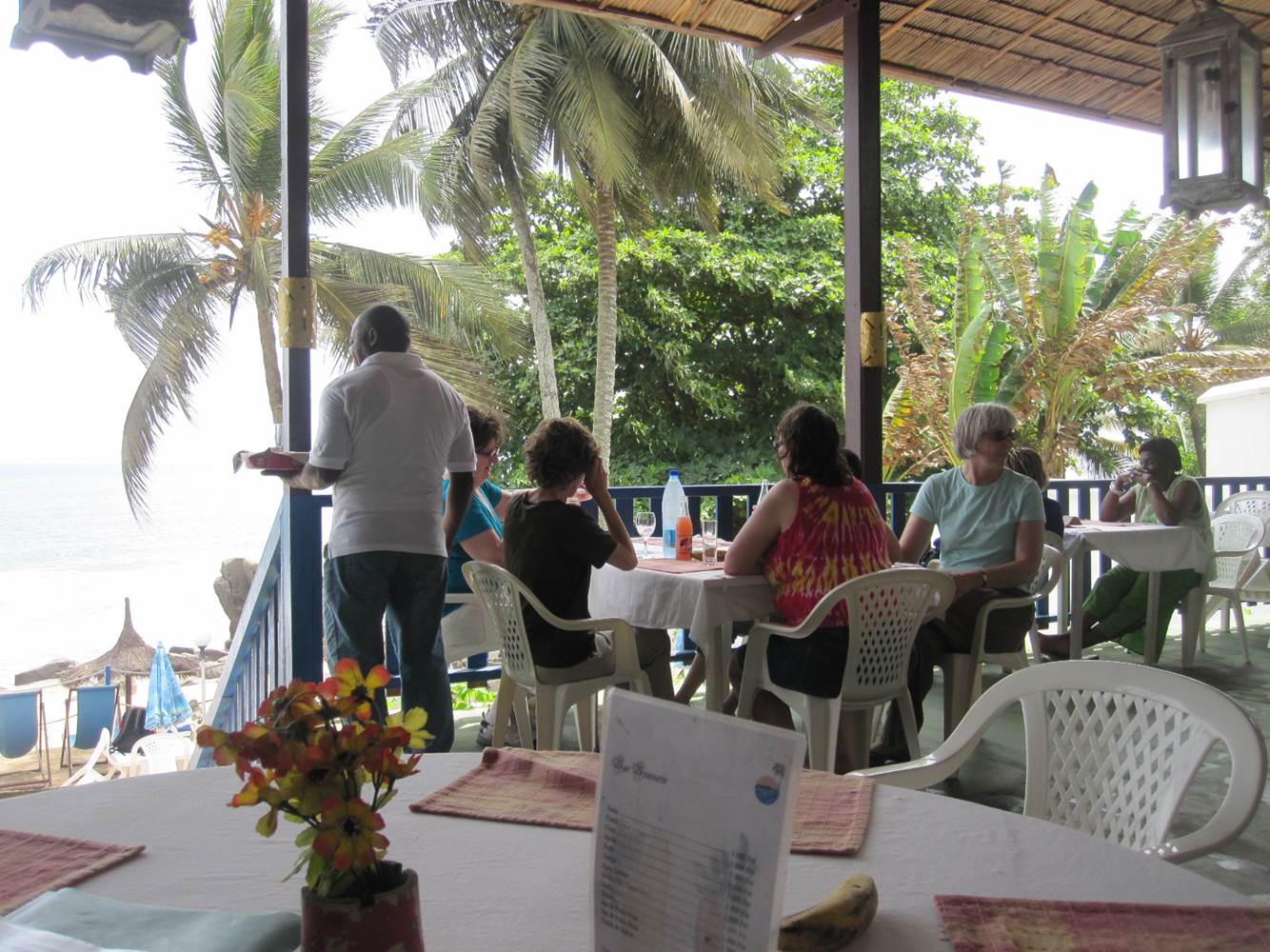 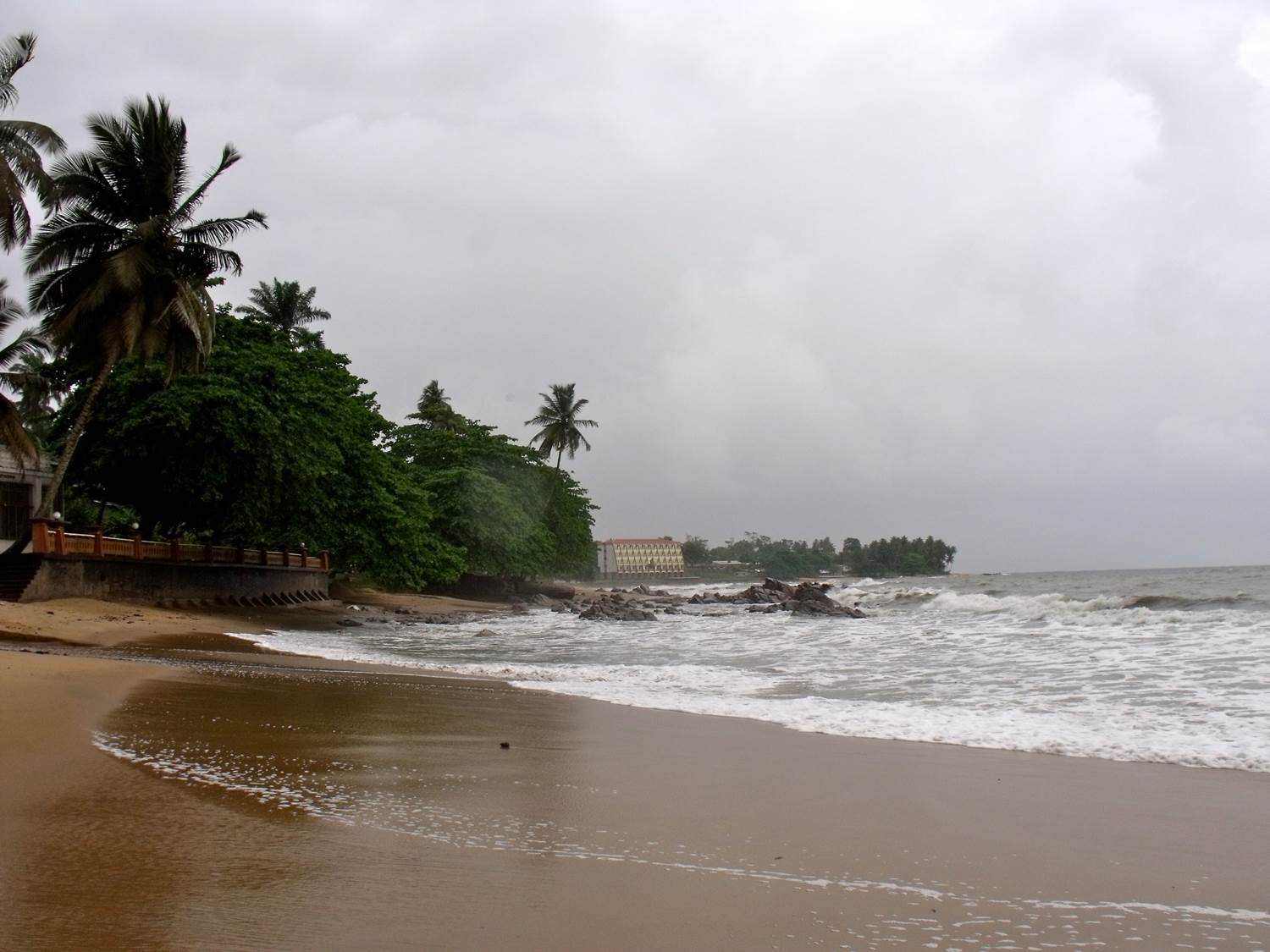 How Many People Can Fit Inside a Tiny Car?

After some beach time mostly watching 3 boys in the water, we had lunch (Damali and I enjoyed the very thin crust pizza) followed by some down time. Seraphin is a college student who knows some English and drives a 5-person Toyota which we are managing to cram at least 7 folks into. He was our regular driver. Another 7-seat mini van taxi was contracted when needed; we managed to get 14 into it one day. We were not allowed to take the most common mode of travel, the motorcycle taxi, because of dangers with no helmets (see last day below). 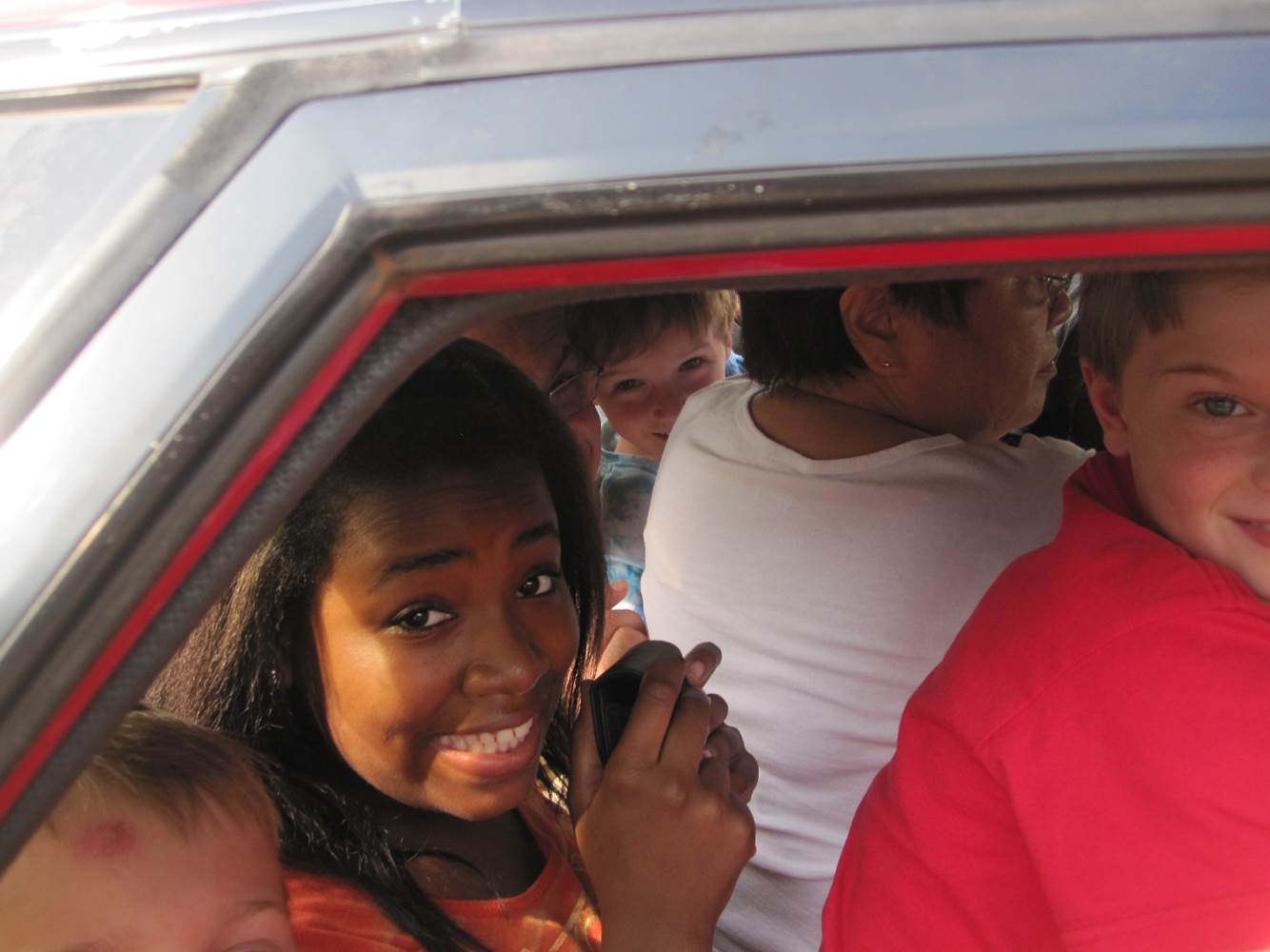 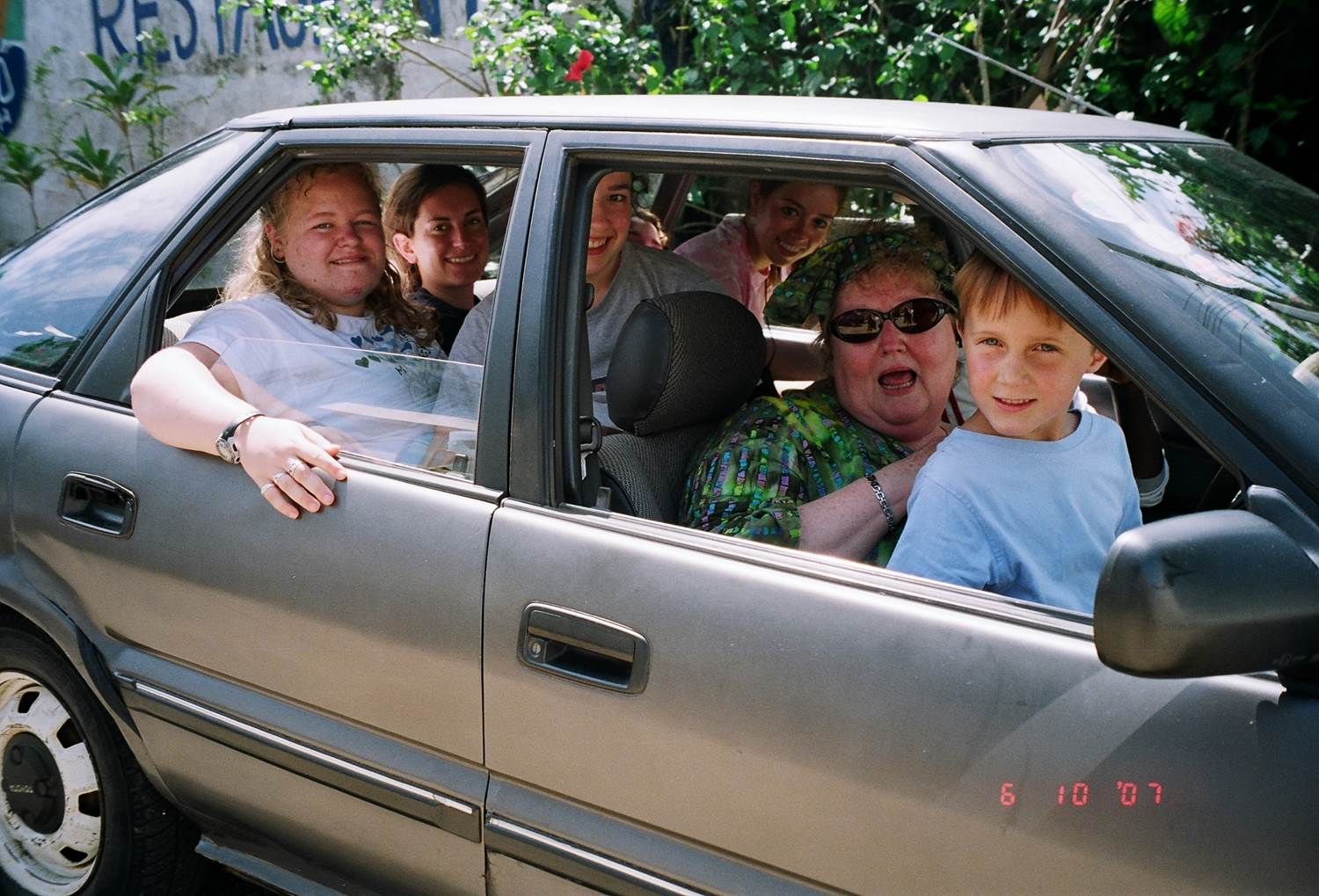 We had a special dinner at Pauline’s, meeting folks at her house. Many kids were playing next to Pauline’s house and Kai was showing off his gymnast skills in spite of sunburned back. I wondered when and where the cooks and the local kids ate so I took a stroll thru the back yard and did see more food than was set out just for us so sure there was plenty. I also spied men preparing kabobs which we did not eat so guessed they had something special for themselves too. 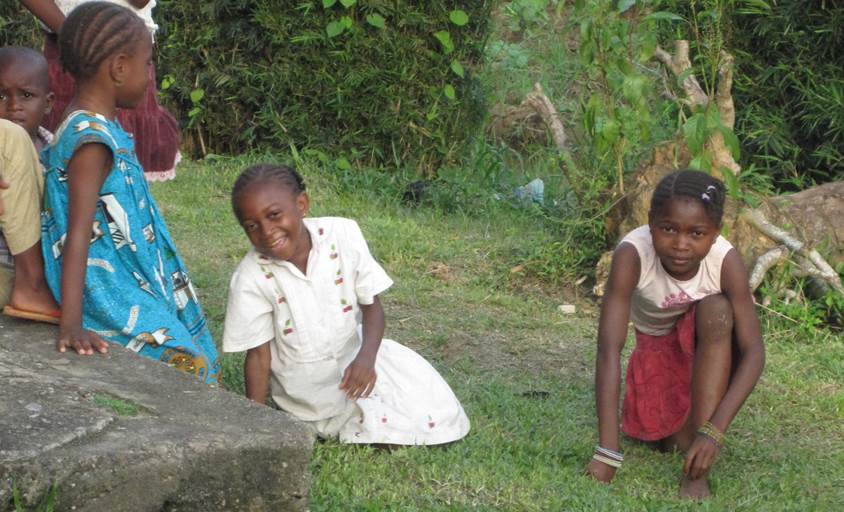 Gtting Acquainted with Ourselves

After dark we walked 1/2 mile to a concert hall. Several groups performed songs ranging from Handel to jazzed up traditional. They were all good and the classical group was very polished. I get the feeling that compared to the Honduras trip we will be receiving as much as giving.

Damali and I are in the only room with separate beds having a bunk and a king with 8′ high frame to hold mosquito net. It had plenty of holes so I also used the Douala net. Chris and Ben are sharing much smaller room with twin so we gave them our bottom bunk.

Discovered that Kribi has 3G and lots of locals have a cell phone. I did not take my phone out in public but wrote notes to home in mornings and evenings. Nine hour difference would have made calling difficult. 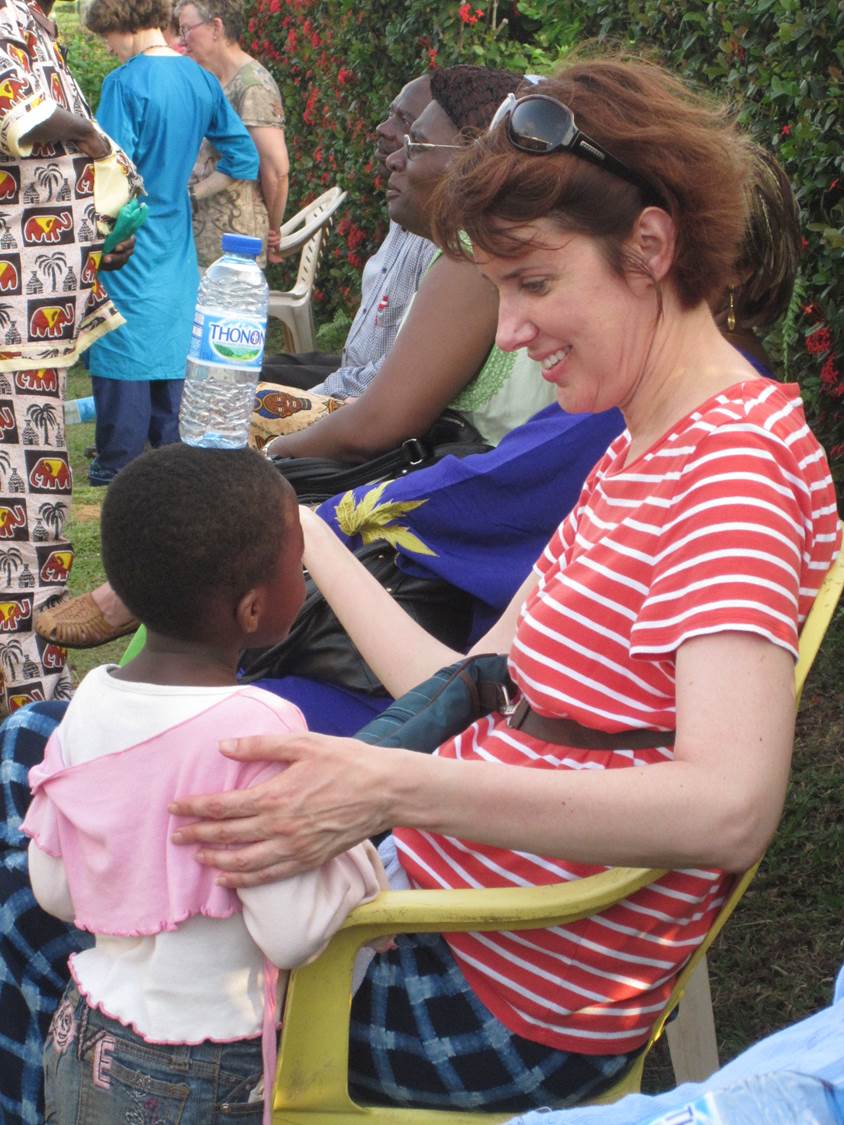 First morning in Kribi we woke at 4am to the sound of rain. Church bells rang at 6am, 7 then 7:30. The Hotel served coffee & tea, bread, eggs and fruit for breakfast every morning. Church service was advertised to be from 10 to 11:30 but with at least a dozen dignitary preachers up front that seemed unlikely. Sure enough, we did not leave the church until 1:45. This happened to also include the dedication to rename the church in memory of Pauline’s husband. Music was awesome, including some hymns that I recognized. The sermon was “non mais” or “no buts” or “no excuses.” 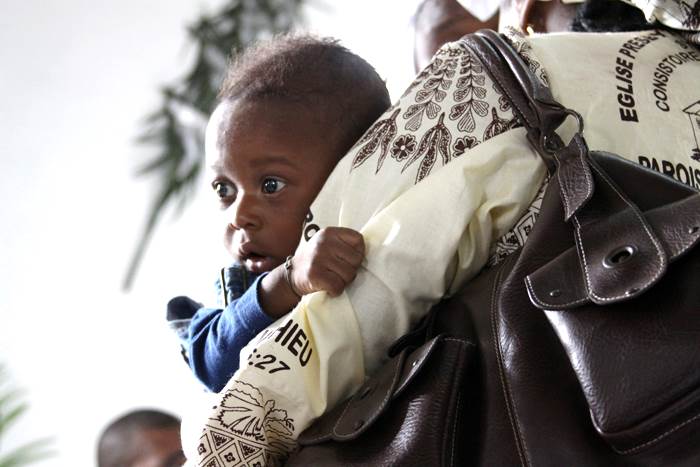 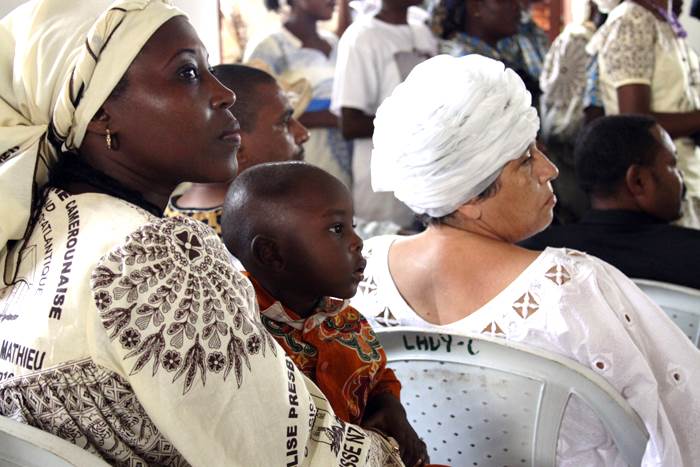 We walked to Pauline’s house and had another formal meal with even more folks. This time a tent was set up with chairs. We had the kabobs to eat that I spied yesterday. Pauline presented some soccer balls that we had brought to some of the folks.

Later, Pauline joined us for dinner at the hotel. Someone asked her about the women’s group at church because in service today the women seemed to take over with song (I’m sure it was planned) in what were very joyful parts of worship. She answered playfully that men are not a necessary part of the service while looking at me. With Jo Ann sitting next to next to me, I asked when they were going to have female Pastors. She answered mostly seriously that it will take time; anyways, it was fun banter. 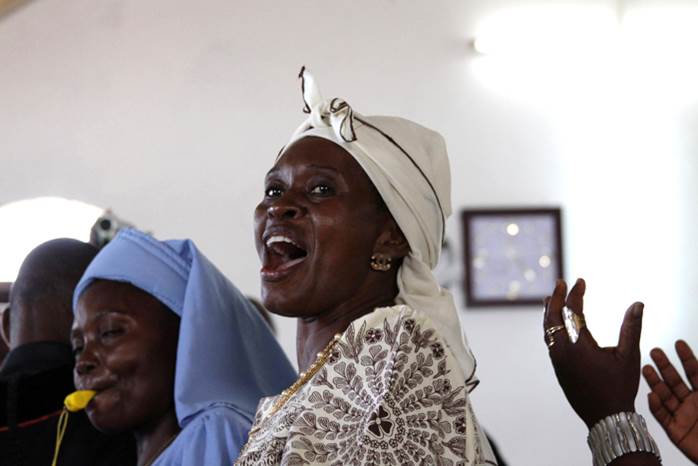 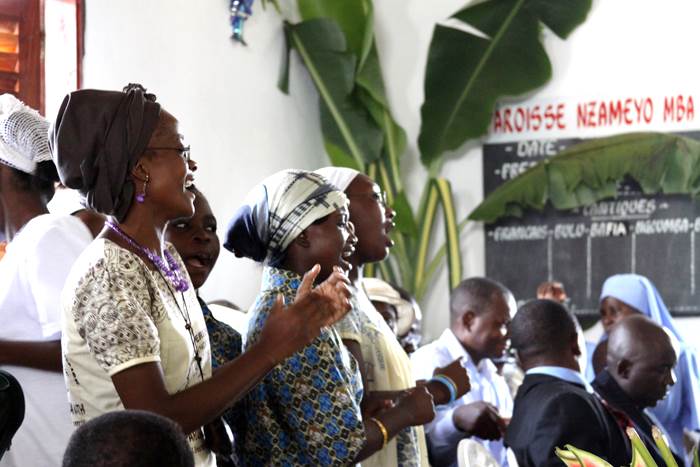 We had our first day at the Wellness Center. Jay explained some of details about the well built in memory of St. John member Janet Hines. We met Phil the interpreter who helped with a short service to start us off. Phil taught us the Cameroon handshake — normal handshake followed by snapping fingers. He described Cameroonian friendliness is often associated with holding hands regardless of gender.

Guy, an unemployed mechanical engineer, was helping with PETs. The day’s plan was to assemble one child and one adult PET. That was when the sky opened up with rain making all other tasks difficult. So, we set up a second station for PET assembly with Damali in charge and built 16 PETs. We discovered that not all were adult as we were told. One was a pull-PET and four were child size. After rain let up the little boys did quality control by riding them around. An ophthalmologist was in adjacent room checking folks out for prescription glasses. 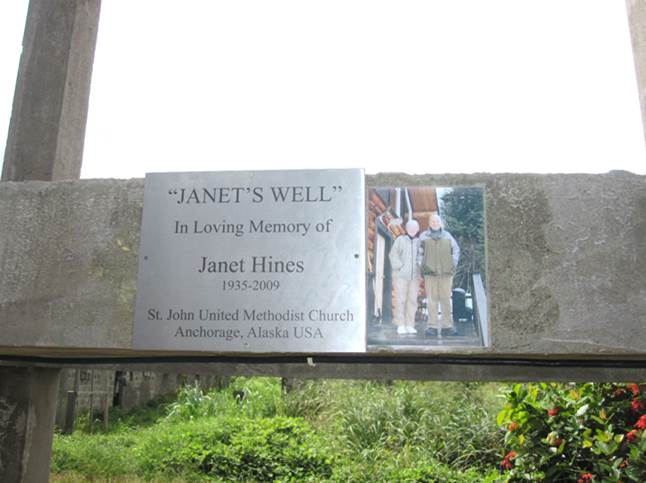 Barbara, Chris & Marylyn came down with stomach bug so stayed at hotel. We completed PET assembly working in two “stations” again. Final count confirmed, instead of 30 adult, we had 25 adults, 4 kid and one pull, plus the two kid PETs that came with us. Pauline was given the news so she had to change plans for 5 adults who had been told they would have a PET.

All the PET’s were in good condition given they were stored for over one year. The wood was treated but not painted. The local organizers asked to paint them in Cameroon colors. I asked Rebecca to send a note of inquiry to our PET contact in Kansas, who explained some fine points to do it. 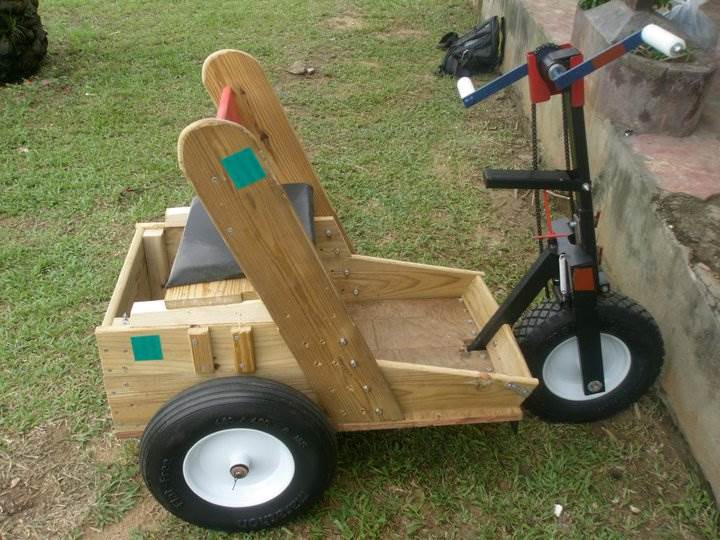 PET International is a world-wide humanitarian organization providing mobility through Personal Energy Transportation (PET), a hand powered tricycle-like vehicle, to individuals who are unable to walk (many whom have been effected by medical problems such as polio, club feet, or other birth defects. There are in excess of 20 million people in developing countries unable to walk. With over 31,000 Personal Energy Transportation (PETs) distributed in 95 countries, PETs have gained international recognition.